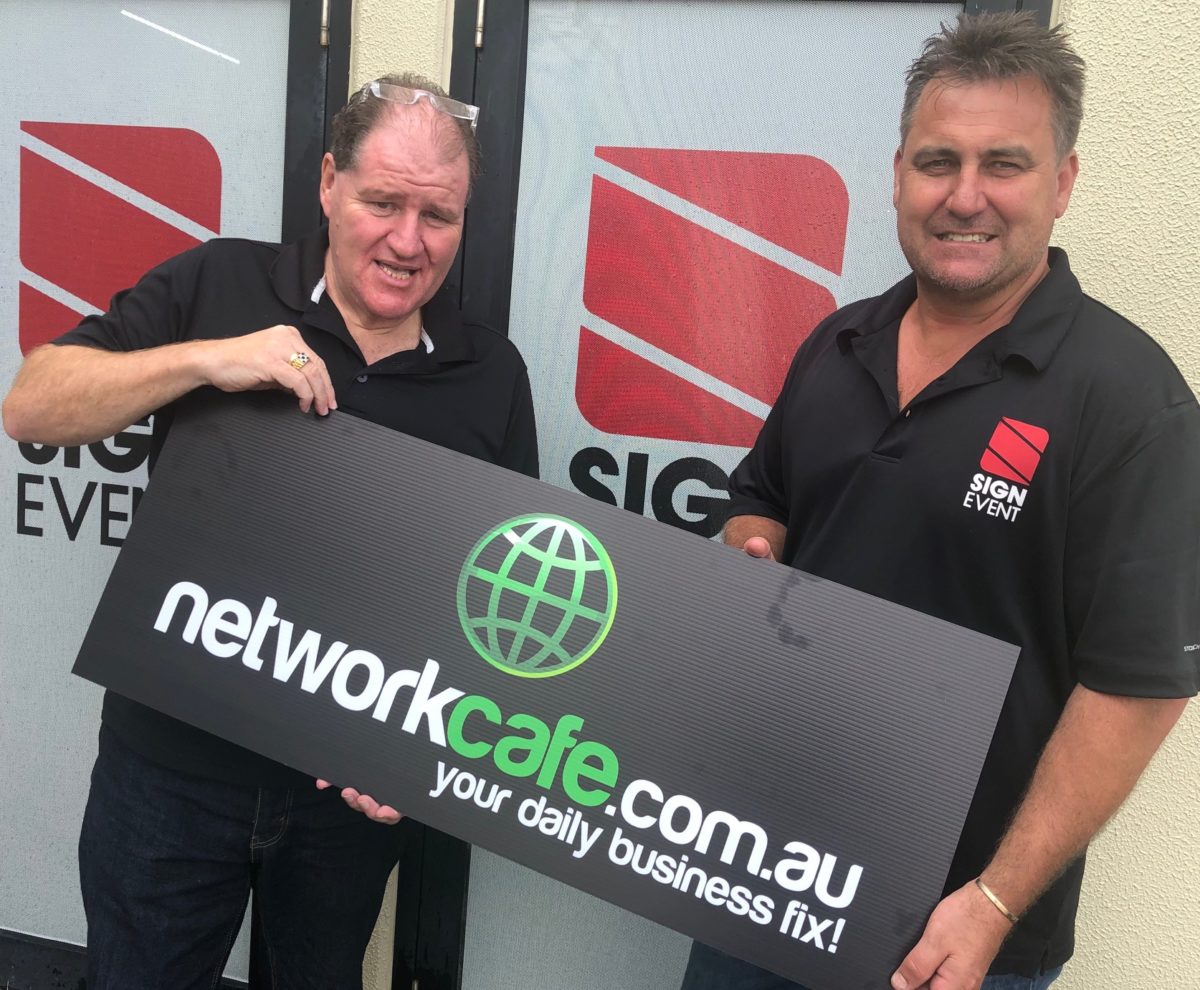 Mark Weissel and his Sign Event crew have been a regular sight on race tracks across Australia for 20 years and have become ingrained in the motorsport, automotive and corporate event landscapes.

Whether it is reskinning the bridges at Mt Panorama, fabricating and relocating a last-minute sign on the back straight at the GC600 at 2am or painting a grass sign at Metricon Stadium before a Gold Coast Suns game, no job is too big or too small for the Sign Event team.

The event industry is driven by adrenaline-fuelled groups of professionals who simply do whatever needs to be done to ensure the ‘show goes on’.

The current coronavirus pandemic has meant the show has come to a grinding halt and that businesses like Sign Event have had to reinvent themselves and also prepare themselves for a journey through the unknown as the world sorts itself out.

It is the predicament of companies like Sign Event that sparked the creation of Networkcafe.com.au which is set to become a major marketing and networking tool for those most affected.

“We basically lost 80% of our business overnight,” said Weissel.

“Our main priority has been to ensure all our staff are looked after as much as possible and the Federal Government’s JobKeeper program has helped with that.

“At the same time, we have to be ready to go as soon as everything starts back up again.

“The brave initiative to invest in the creation of Networkcafe.com.au in such a difficult environment can only be applauded and I think will be an amazing asset for the entire industry as it develops over the coming weeks and months.

“It is up to all of us to spread the word and really work together to get through.”

Weisell grew up in the North-East Victorian border city of Wodonga and started his signwriting apprenticeship at Signs by Knight as a 15 year-old.

While he was making his way into the ‘real world’ he was also growing in stature as one of the country’s best young cyclists which saw him offered a position at the Australian Institute of Sport in Adelaide for four years.

His career was put on hold as he chased his two-wheel dream which saw him ranked as the leading 50km point score rider in the country.

In 1990 he moved to the Gold Coast as a 21 year-old and picked up his career with a local company which had the contract for the first IndyCar race on the streets of Surfers Paradise. 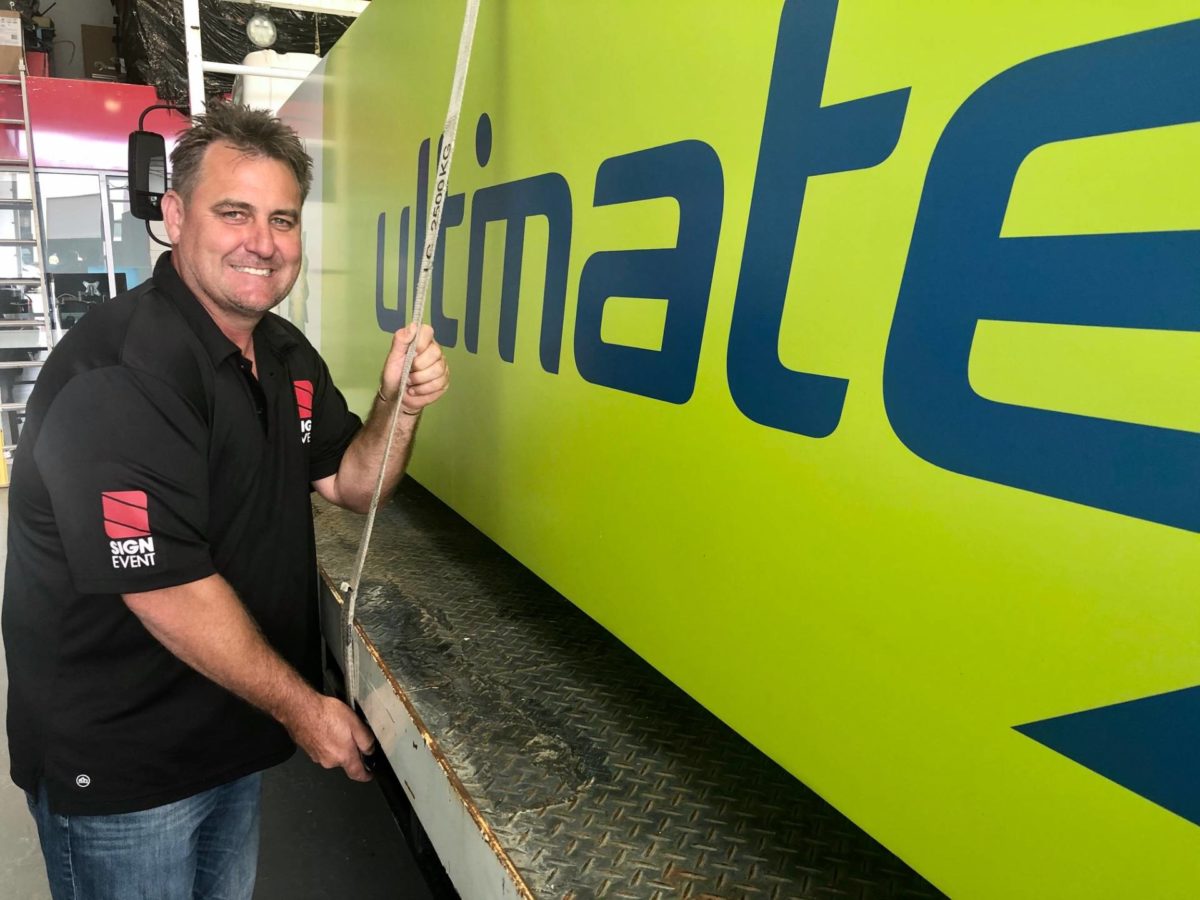 In 2000 he created Sign Event with his wife Kimberley and well-known industry identity Terry Slattery and won a contract for the Gold Coast event, which he has maintained ever since.

He extended his relationship with the sport when he was contracted by Supercars Events in 2003 and at that stage he had five staff.

He now services all of the major Supercar-owned events, including the Bathurst 12 Hour, Bathurst 6 Hour and Challenge Bathurst with a team of 25.

His other major event clients include the World Surfing League, national and international rallies, PGA golf, the Gold Coast Suns and the Aus-X Open.

Weissel also started working with Chempro Chemists when they opened just one outlet and now services all 85 of their stores with internal and external signage.

“Any business is about people and we need to ensure we have all ours when the world is in a better place,” said Weissel.

“The event business is tough, but it is also enormously rewarding when you see a venue come together and represent the sponsors and partners with fantastic TV images.

“If there is one thing we have learned through this current period it is the passion we all have for sport and major events – whether that is as a live spectator or TV viewer.”

Sign Event is one of an initial group of 30 businesses that have already signed up to be part of Networkcafe.com.au community.

“I think the Networkcafe.com.au program is fantastic and the fact that it’s free in the current environment makes it an incredible asset for businesses. Why wouldn’t you be involved? Especially when an industry-minded organisation like Speedcafe.com is driving it,” said Weissel.

“In times like these the industry really needs to stick together and help each other where we can and I think we all need to spread the word and see Networkcafe.com.au grow into a terrific networking tool for all of us.”