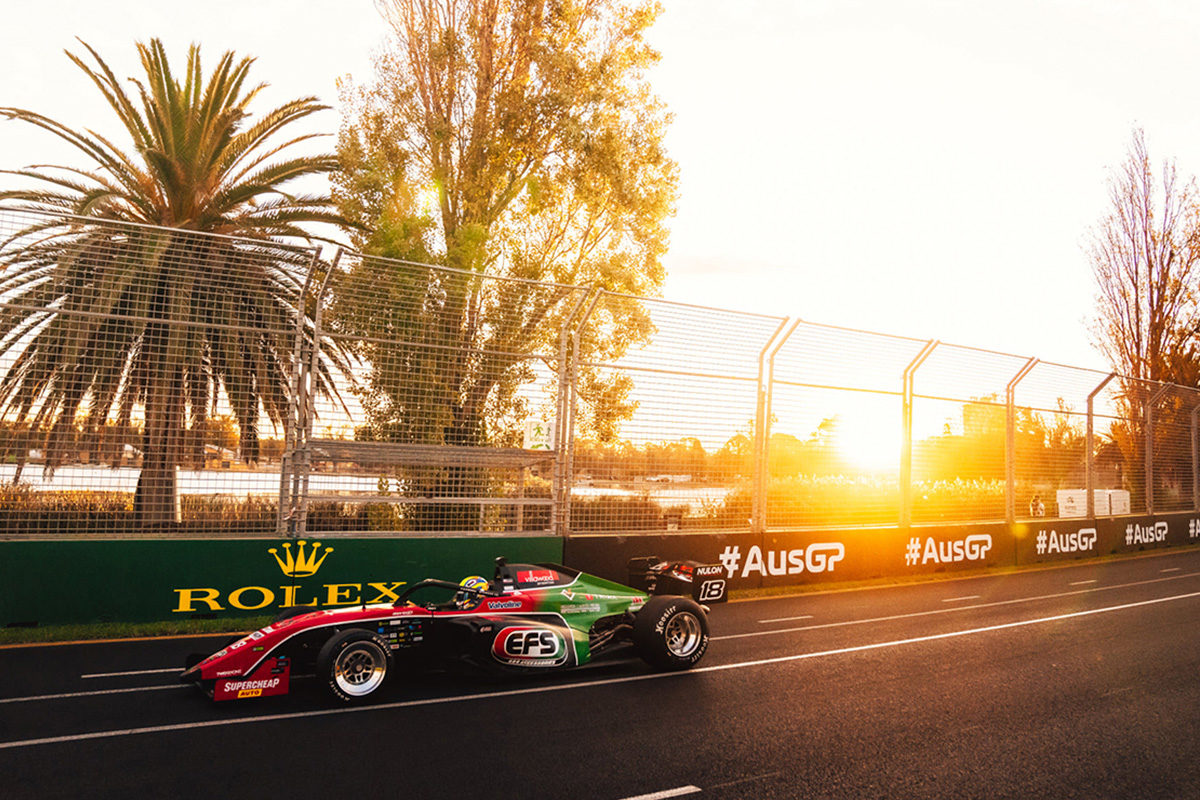 Daniel Goonan is an up-and-coming graphic designer in the motorsport industry, and continues to impress with his eye-catching designs.

The Gold Coast-based freelancer got his start designing in the motocross scene whilst working at Rival Ink, designing liveries for athletes competing in AMA Supercross, as well as some of Australia’s Factory MX teams.

However, Goonan wanted to break into the Australian motor racing scene, growing his repertoire from what he had built in the Supercross arena, designing for some of the biggest names.

Continuously achieving his goals, his most recent livery design came in the form of Aaron Cameron’s S5000 livery which was raced at the Australian Grand Prix weekend at Albert Park.

“Having my first design on an open-wheel race car flying around an F1 circuit, that was a bit of a ‘oh wow okay, I didn’t expect to be here in my career’ sort of moment,” Goonan said.

Goonan has expanded his expertise to helmet design, vehicle liveries and various different artworks and logo designs, mainly pertaining to the motorsport industry.

He has recently designed a helmet for Joey Hand, who has experience in all different kinds of motorsport, including the NASCAR Cup Series, DTM and was the 2016 24 Hours of Le Mans winer, driving with Sebastian Bourdais and Dirk Muller.

“Some of the biggest stuff I’ve done in the last year would include Caroline Buchanan, she was a BMX champion for the Australian Olympic team, I worked with her on one of her custom lids, so that was a big moment for me!

“Working with Ida Zetterstrom, a Top Fuel driver in Europe, that was another big goal ticked for me, growing up and competing in drag racing myself. Top Fuel is obviously the benchmark when it comes to racing on the one-quarter mile.”

Goonan will continue to design for clients in commercial and motorsport projects, previously working with clients such as Red Bull, Supercheap Auto, the Bathurst Motor Racing Museum and more.

His design career all began as he was growing up, with his mother being an artist, and his father competing in drag racing and working in motorsports.

“The easiest thing for me was just to combine the two, really.”

Among his many accolades in the motorsport design industry, he has an overall goal of opening a creative studio on the Gold Coast for him and up-and-coming freelancers that are looking for a place to network and be surrounded by other creatives.

Goonan is looking at continuing to grow his business and start designing for more teams, getting more involved in the Australian motorsport scene and eventually the European sector.

CLICK HERE to view Two Six One Design on Networkcafe.com.au.