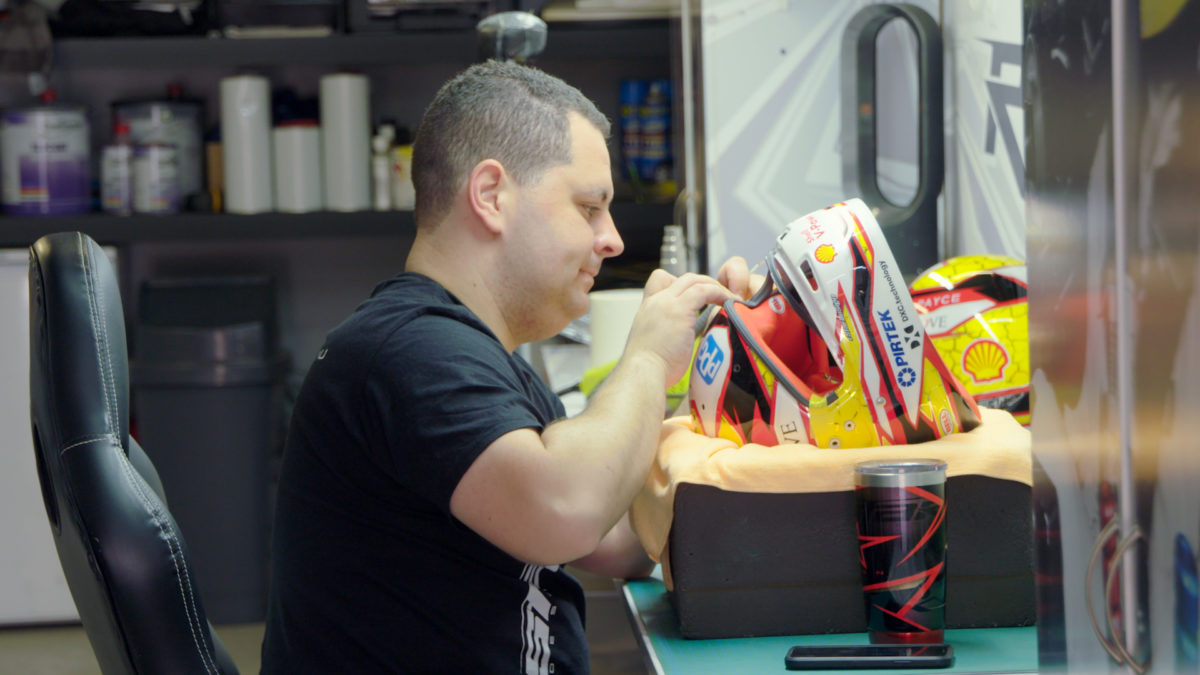 Frank Stivala working on one of Scott McLaughlin’s helmets

Once upon a time, Frank Stivala was an automotive painter. Now, he’s one of Australia’s most prominent helmet artists, designing and decorating lids for drivers around the world under the RStar Design banner.

It’s a niche industry, one he fell into almost by accident, but one which he is passionate about.

“I literally don’t go to work,” he jokes.

Based out of Sydney, Stivala’s work feature prominently on the Supercars grid. There’s representation in IndyCar, and he’s even had Chase Elliot reach out after spotting his work on social media.

“That was a pretty big thing for me personally, without putting too much focus on it, or sounding like a fanboy,” Stivala said.

“When someone from the other side of the world notices your stuff and takes it upon themselves to reach out especially someone of that profile, it’s a pretty cool thing.”

RStar Design offers a range of services, from complete designs to applying your existing look onto a new lid.

He has a strong relationship with PPG, which he credits as a critical influence on his business, along with a vast range of helmet manufacturers.

“Pretty much anything in anything to do with a helmet,” is the response when asked what his business can do.

“Obviously the core of the business is the design and paint side of things, but I do everything from helmet supply and paint packages, helmet supply on its own, have a full range of accessories in stock at all times.”

Stivala also knows the FIA regulations inside out, and prides himself on offering a one-stop-shop when it comes to motorsport helmets.

As a former automotive painter, he’s come at the industry from a different angle to most.

“Most of the other guys out there in graphic designers that have learned to paint where I’ve gone the opposite way,” he explained

“I’ve started as a painter and learned to design.

“I grew up around motorsport and always sort of mucked around with an airbrush and graphics and stuff like that on cars.

“I suppose [through] that connection through motorsport I just sort of started to explore it.

“I didn’t even know it was a thing at the time, we just always painted our own stuff for family stuff.

“Over time, it’s just sort of taken over and well out of control now.”

This year he will have painted more than 100 helmets and has begun to notice a trend back towards more simple designs.

“Over the last 12/18 months I’ve noticed the trend back the other way – guys are starting to want to, not go back to the 70s and 80s basic, but start to simplify everything a little bit, and add details in other ways,” he observed.

“So without getting too technical, a basic-ish layout – when I say layout, I mean the line work – and then combining that with tone on tone patterns, and build detail into that, as opposed to putting crazy lines everywhere and 50 different colours, which was never my style anyway.

“But yeah, I’ve noticed a shift back the other way, guys wanting to simplify things to an extent – a bit more of a classy look about things and adding detail in other unique ways.”

Stivala is enthusiastic about his work, excited by both the project he’s working on and the next one – not to mention the one after that.

He’s produced helmets that have been worn at the Indianapolis 500, with Scott McLaughlin, though he wasn’t able to be there in person to watch on.

He hopes to change that in future, all the while RStar Design continuing to grow its international reputation and, on current form, its appeal too.

CLICK HERE to connect with RStar Design on Networkcafe.com.au.