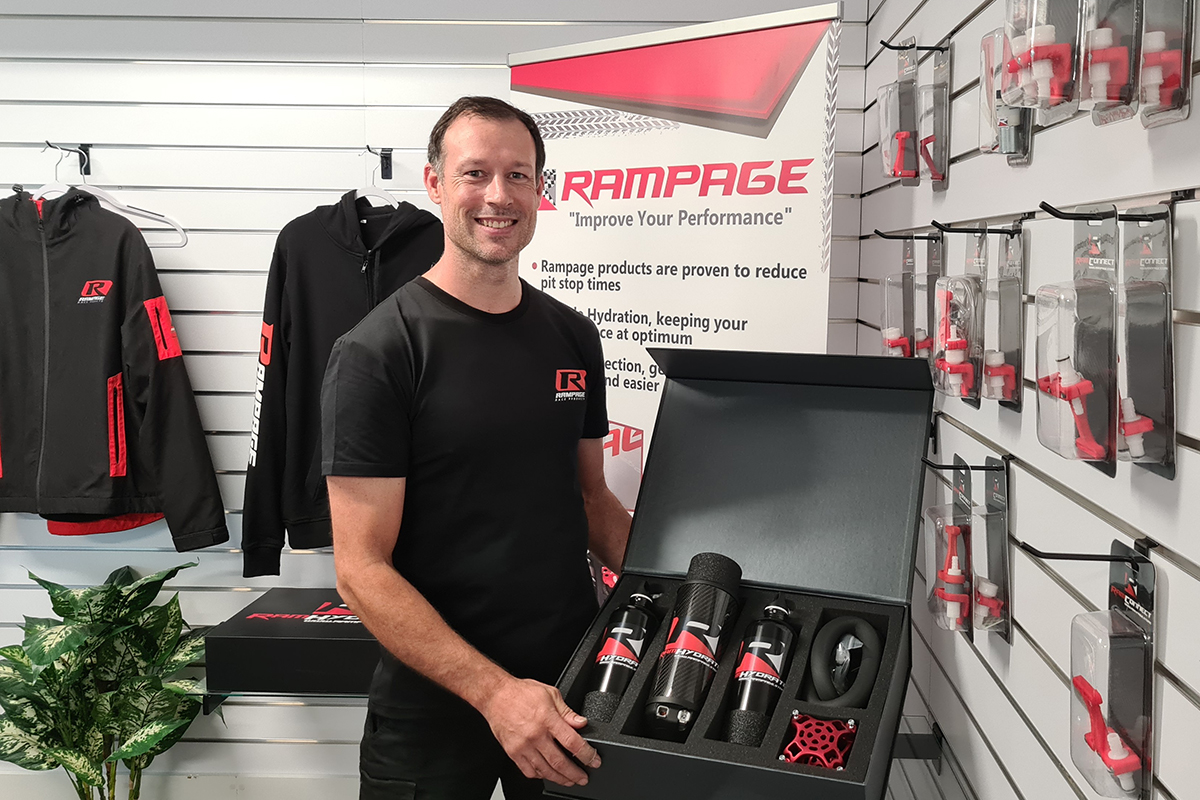 From a base on the Gold Coast, Mike Elkington has set himself apart in the world of motorsport from Formula 1 to Supercars, NASCAR, and more.

A hugely credentialed and experienced engineer, the New Zealander has risen to the top of every field he’s turned his hand.

For a time that saw him working as Craig Lowndes’ race engineer, but most latterly he’s the man behind one of the world’s leading race car drinks systems.

Rampage Race Products is a world-leading supplier of driver comfort and hydration systems developed by Elkington and now in use around the world.

“I’ve been in Australian motorsport for about 16 or 17 years now,” he began when asked where the inspiration for his business came from.

“I think it came about from all these years of running Supercars and then going overseas and doing some endurance stuff over in Europe, and just seeing what’s needed, what cars had, and what they didn’t have.”

He progressed, building jet units for boats and power wind turbines before heading to Australia.

Once here, he played a part in constructing the production line for the VE Commodore, before securing a role with WPS Racing as the Machine Shop manager.

It’s a background that has afforded him the expertise and experience to understand the problem experienced by drivers and teams in the motorsport industry, placing him perfectly to develop a range of products to service that need.

The solution he came up with has proved a hit and ensures drivers are kept in tip-top shape in the car and, in Kimi Raikkonen’s terms, have access to ‘the drink’.

A prime example was the 2018 Supercheap Auto Bathurst 1000, when Elkington’s products were fitted to all three podium finishers.

It was a race which could easily have been won by Erebus, only for David Reynolds to suffer cramps late in proceedings.

Ironically, Elkington now sponsors Erebus, meaning there can never be a repeat of the issue seen so dramatically that day.

His products have also been fitted to other race winners at Bathurst, across all disciplines; from the 1000 to 12 Hour and 6 Hour.

With an established pedigree and growing reputation, the COVID-19 pandemic triggered a dry spell and forced Elkington to broaden his horizons.

That saw Rampage expand into the world of sim racing, developing a custom solution for the market.

“After the F1 last year when everything just shut down, our sales pretty much stopped overnight,” he said.

“So for quite some time, we were wondering what we were doing, and the sim scene started to take off.

“We started building simulators,” he added.

“We had another guy that helped me a lot with it. He used to build a lot of stuff for Simworx, so he knew all the background and the computer side of it, and what needed to happen and what we needed to run.

“Then I just went about designing and building those, so now we’ve got a full professional sim set-up as well.”

While that has helped Rampage carry on, the hydration systems are its primary business.

“The drink system was our main part of the business,” Elkington said.

“We also do the quick connections, which is basically the next add-on, I suppose, which helps you connect your drinking radio and things like that, which is probably our main seller.

“They’re designed for every single car in any category to be able to run these.”

There is more to come, with a number of exciting projects either already in the pipeline or in the near future that will leave Elkington and Rampage Race Products in a strong position moving forward.

In the interim, the focus is on building brand awareness.

While well known in the industry, and respected in paddocks at elite level globally, it remains under the radar for the most part.

“The more we can get the name out, the more people are going to realise how good these products are, and that they’re homegrown here in Australia,” Elkington said.

“I do have a few bits and pieces made in China and in the States, but everything gets shipped here and we assemble everything, and do everything from our shop and assembly area here on the Gold Coast.”

CLICK HERE to connect with Rampage Race Products on Networkcafe.com.au.