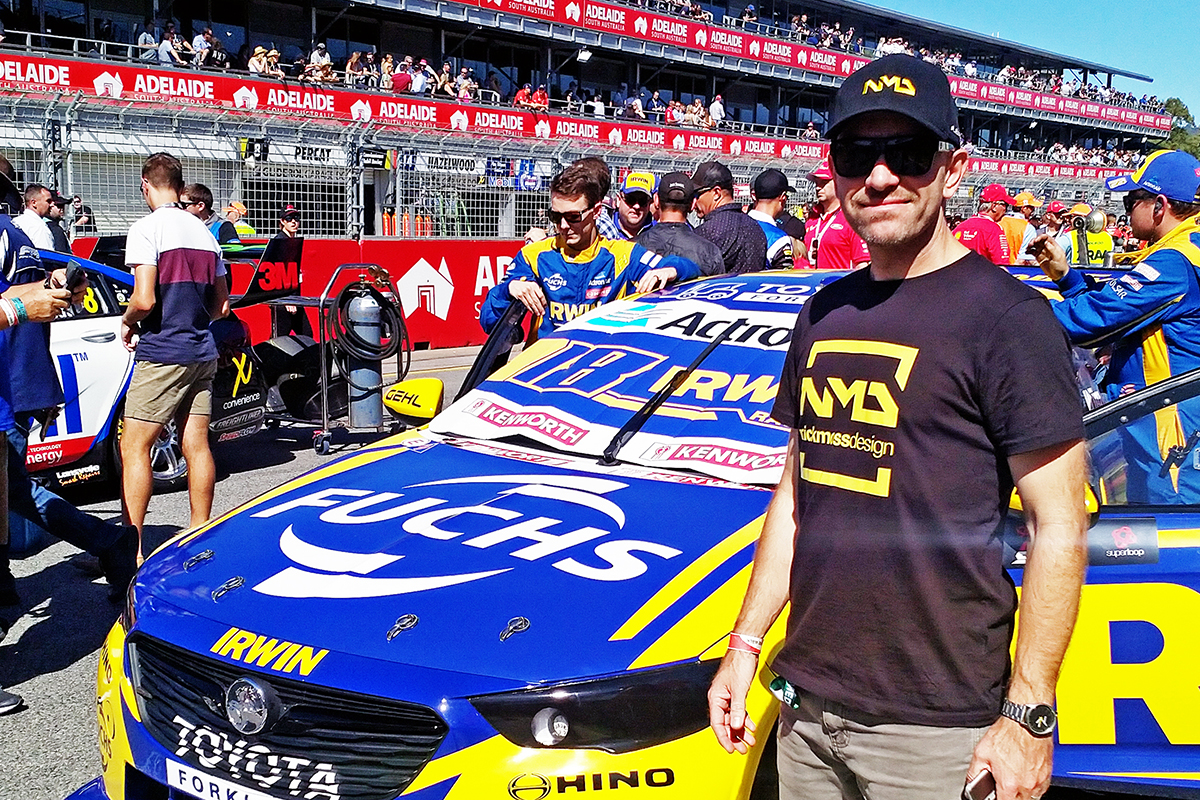 Nick Moss on the grid with one of his designs

For the past two decades, Nick Moss has been drawing the future of Australian motorsport and creating some of the most iconic designs in the sport.

Moss is one of a small collection of motorsport-focused livery creators dotted around the country, and has seen his handiwork adorn championship and Bathurst 1000 winning Supercars.

“I’m avid motorsport lover since I was a kid, but I never quite knew how to transition that into anything remotely that might be a career,” he explained.

“I left school and studied graphic design for a short period and then couldn’t find work, and then fell into the sign industry.”

Without knowing it, Moss’ somewhat accidental career would see him blend his love of motorsport and artistic talents into a passionate side-hustle.

In the early 2000s the world was a very different place.

Facebook and social media were not yet mainstays of society, and instead the gathering place online tended to be forums.

There were thousands, seemingly one for every conceivable niche interest, and Moss gravitated towards V8Central, a hub where like-minded fans of the sport discussed happenings in detail.

It was also something of a shopfront, even if Moss didn’t realise it at the time, and soon he began posting his fantasy livery drawings.

“I spent a couple of years doing that.”

After a time, his talents were spotted and he was commissioned by FPR to put together some concept liveries.

It was his first commercial job, and while the designs ultimately went unused, it was a toe in the water for what would become his primary career in the years to come.

Things took time though, and for a long period Moss remained working in the sign writing industry during the day and creating eye-catching race car liveries at night.

Eventually, things snowballed, and he could no longer keep up with demand.

“I couldn’t actually keep up with having my full-time job and doing the livery stuff on the side and had to ditch the job altogether and just focus on livery work,” Moss said.

Moss’ background in sign-writing, he reasons, has ultimately left him with a greater set of skills, as he has a firm grasp of the practicalities when it comes to transferring his work from the digital world and onto a car itself.

“In some ways, my practical brain might limit me from time to time, but I’d hate to leave a client disappointed by coming up with some idea that just can’t happen,” he explained.

“I could have wasted their time, the sponsor’s time, could have invested months in this thing then, in the end, you can’t even do.

“You’ve always got to be cognisant of that.”

For Moss, the key to great livery design is about balance; striking the right mix between the commercial realities and the artistic merits of the final product.

The modern realities are such that, especially in Supercars, there is a great need for multiple sponsors to be prominently displayed, creating complication within a design that historically wasn’t there.

“A lot of designs never quite find that balance, they’re always either cluttered or over complicated, or there’s a lack of coherence between all the elements,” he reasoned.

“Most designs that people refer to as classic is from an era where there were less brands on the car.

“One of the things a lot of cars struggle with now to be iconic, is just – it’s like a sticker bomb [because] you’ve got hundreds of brands [that] you’ve got to try and integrate.

“Whereas, say a Martini livery, very pure; it’s one name, maybe even the main brand is quite small on the car, and then it’s just got some lovely stripe work or coloration.

That’s not to say it doesn’t exist, and Moss has been tasked with creating a similarly pared down design for BMW in the British Touring Car Championship.

“We’re working with the classic tri-colour iconography of BMW and having the opportunity to reinvent it, which has been pretty special,” he said.

“They were pretty stayed in the way that they were presenting it before I got involved.”

It is a rare opportunity though as the commercial realities typically drive the creative process, a trend Moss sees continuing into the future.

There are avenues to be explored in the years to come, though, and he’s keeping a close eye on the broader industry to understand paints and other technologies that he might be able integrate down the track.

Until then, it’s a case of continual evolution, just as he has done over the last 20 years; from sketching out on paper to rendering his designs in 3D.

As the industry moves forward, Moss is helping design its future.

CLICK HERE to connect with Nick Moss Design on Networkcafe.com.au.