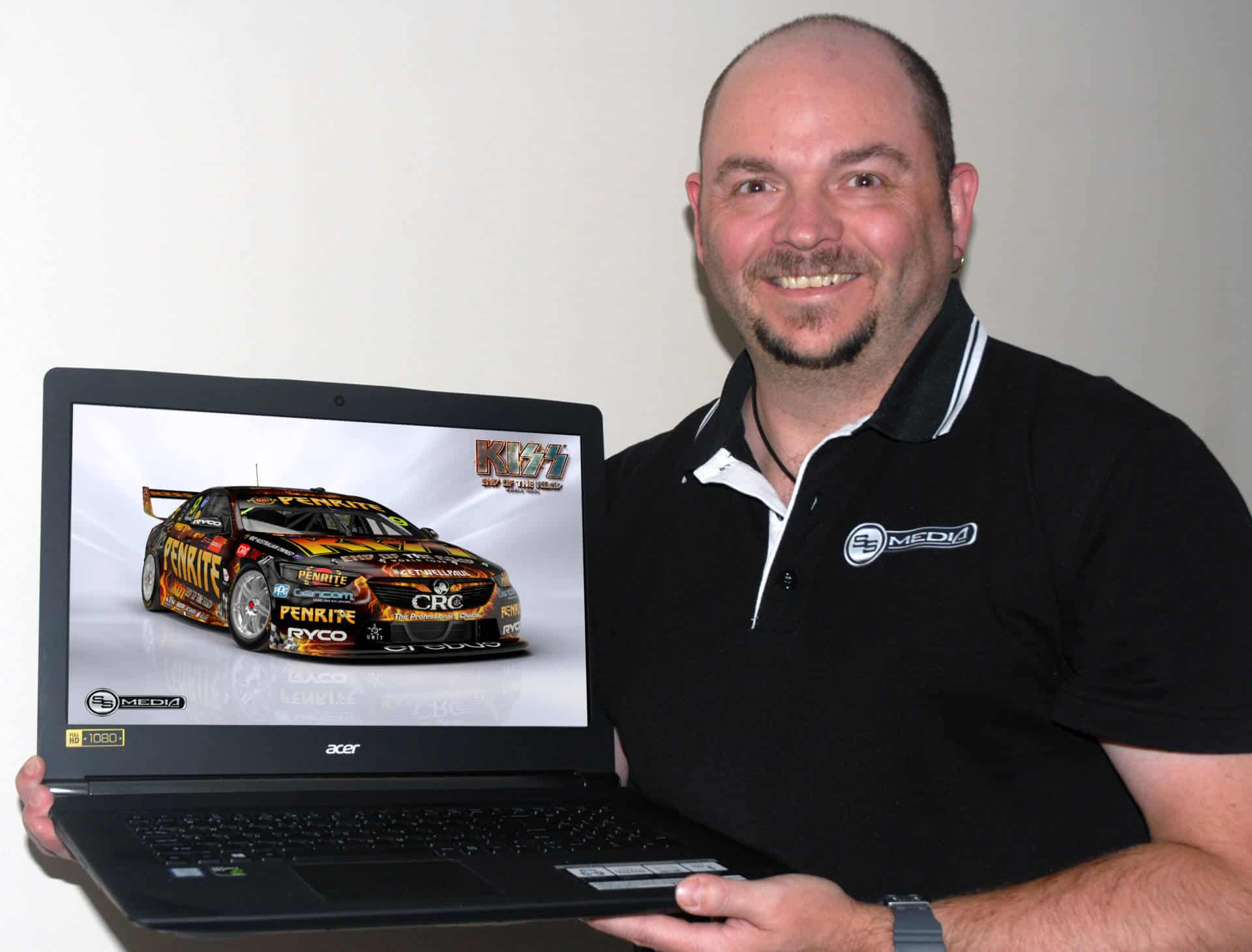 They say that life is full of ‘sliding doors’ moments and Scott Yorston has had his fair share.

Sometimes when he almost certainly should have turned left, he turned right and new, unexpected opportunities have opened up as a result.

The worlds of art and design and motorsport are definitely like that; when you combine the two, sometimes you just need to hang in for the ride and trust your gut.

Yorston has ridden the highs and lows of that journey and some 26 years after starting on his career path he has established himself as one of the most respected livery designers in the business.

Yorston was born in the Melbourne suburb of Essendon in the mid 1970s and while he had to wait nine years for his beloved Essendon Bombers to win their next flag in 1984, they have done the right thing and gone on to win another three in his lifetime (1985, 1993, 2000).

He studied both photography and graphic design at high school and in 1994 he started an unpaid internship with the new Motorsport News magazine with Chris Lamden and Sean Henshelwood.

Yorston then took a sabbatical from the motorsport industry, but reconnected with Henshelwood on his 321 Ignition magazine in 2006.

In the meantime he had acquired new business qualifications and started his own photography business, Yorsay Photographics.

While on a job to do a story on race car livery design, Yorston met well-known designer Peter Hughes who was working on the 2007 look of the Holden Racing Team Commodore.

“I was extremely keen to learn everything about liveries and their design,” Yorston told Networkcafe.com.au

“I was asking Pete (Hughes) a lot of questions, which must have made an impression with him.

”He has without doubt become not only a great mate, but the biggest influence on my career/work and the standard that I now set myself.”

Like many photographers, Yorston was looking for his big break to complement his passion.

As it turned out, the opportunity did not come behind the lens, but in front of the computer screen with a little help from Australian motorsport legend John Bowe.

“Once JB had seen some of my drawings and illustrations he asked me to design his new livery for the Camaro. At the time it carried a Westrac Cat livery.

“It obviously went over well with JB as I then went from a struggling photographer to being in high demand as a graphic designer.

“JB really became my mentor and pushed my name out there, so much so I decided to ditch the photography and rename my business ssMEDIA.”

The doors continued to open thanks to the late Jamie Blaikie at Porsche Motorsport who basically made Yorston the unofficial designer for Carrera Cup in Australia.

He was then hired to do all the renders for the Supercars media guide and continues to work with the organisation on things like the new Gen3 vehicle.

Currently, Yorston is the official designer for Dick Johnson Racing, Erebus Motorsport/Penrite Racing and the new S5000 series, where the cars were the concept of his original Motorsport News boss Chris Lambden.

There is no doubt that good designers have to have a great deal of passion for what they do or they simply won’t deliver standout products.

Yorston is a massive fan of the rock back Kiss and was the driving force behind the concept of creating Kiss liveries for the Erebus Commodores to celebrate their Australian tour at the end of 2019.

It was one of the most successful campaigns in Supercars history, despite the fact the band had to cancel their tour because of illness to lead singer Paul Stalney.

He has helped Erebus and DJR to Best Presented Team awards in recent years.

COVID-19 has meant a serious downturn in business for everyone attached to the motorsport industry, but Yorston was battered a little harder than others.

With the pandemic about to hit full swing in April, the ssMEDIA Facebook page was hacked and had to be re-booted, losing the 13,500 existing followers.

Being based in Melbourne, Yorston has also been in total lockdown from June until just last week, but he has punched his way through.

He has used the time to further develop his own skills and had some elective surgery on a wrist which kept him away from the design studio for a few weeks.

He has also developed the commercial side of his business and created limited edition prints for Stone Brothers Racing and Erebus Motorsport, which are for sale through his website.

Yorston actually teamed with Speedcafe.com to create a one-off print to celebrate Marcos Ambrose’s back-to-back Supercar titles in 2003 and 2004 which was won by a West Australian-based reader.

Yorston and ssMEDIA were one of the first businesses to become a part of the Networkcafe.com.au ‘family’.

Networkcafe.com.au was established in an effort to create a network for small- to medium-sized businesses associated with the motorsport or automotive industries that could be negatively affected as a result of the COVID-19 pandemic.

“Speedcafe.com is such a great asset for the motorsport community and the development of Networkcafe.com.au is proof of that,” said Yorston.

“It only seemed like days after the seriousness of COVID-19 became evident that Networkcafe.com.au had been developed to help small businesses in the industry.

“I think the effects of COVID-19 are going to be seen for a long time to come and assets like Networkcafe.com.au can only be a positive for everyone as we all try to rebuild.”